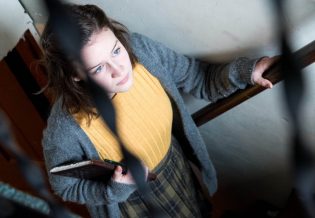 The Diary of Anne Frank

Discovered in the attic in which she spent the last years of her life, Anne Frank’s remarkable diary has become a world classic—a powerful reminder of the horrors of war and an eloquent testament to the human spirit.

In 1942, with the Nazis occupying Holland, a thirteen-year-old Jewish girl and her family fled their home in Amsterdam and went into hiding. For the next two years, until their whereabouts were betrayed to the Gestapo, the Franks and another family lived cloistered in the “Secret Annexe” of an old office building. Cut off from the outside world, they faced hunger, boredom, the constant cruelties of living in confined quarters, and the ever-present threat of discovery and death. In her diary Anne Frank recorded vivid impressions of her experiences during this period. By turns thoughtful, moving, and surprisingly humorous, her account offers a fascinating commentary on human courage and frailty and a compelling self-portrait of a sensitive and spirited young woman whose promise was tragically cut short. 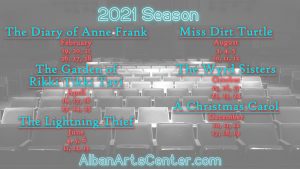 The Diary of Anne Frank
Auditions:
December 5 & 6
Shows:
February 19,20, 21, 26, 27, 28
In this transcendently powerful new adaptation by Wendy Kesselman, Anne Frank emerges from history a living, lyrical, intensely gifted young girl, who confronts her rapidly changing life and the increasing horror of her time with astonishing honesty, wit, and determination. An impassioned drama about the lives of eight people hiding from the Nazis in a concealed storage attic, THE DIARY OF ANNE FRANK captures the claustrophobic realities of their daily existence—their fear, their hope, their laughter, their grief. Each day of these two dark years, Anne’s voice shines through.

The Garden of Rikki Tikki Tavi

The story follows the experiences of a mongoose named Rikki-Tikki-Tavi (from his chattering vocalizations) after he becomes the pet of an English family residing in India. He becomes friendly with some of the other creatures inhabiting the garden and is warned of the cobras Nag and Nagaina, who are angered by the human family’s presence in their territory.

As a son of Poseidon, Percy Jackson has newly discovered powers he can’t control, monsters on his trail, and is on a quest to find Zeus’ lightning bolt to prevent a war between the Greek gods. Featuring a thrilling original rock score, The Lightning Thief: The Percy Jackson Musical has fans of all ages “cheering like the ball is being dropped on New Year’s Eve!” (New York Magazine) After all, in this “action-packed, mythical adventure,” (City Dads Group) “Percy Jackson is a rock star!” (NY Daily News)”.

Surviving adolescence is hard anywhere, especially in underprivileged neighborhoods. Five 10-
year-old best friends try to survive a summer of broken homes, bullies, thieves – All the many
pitfalls of their block. They try to navigate it in a most unexpected way: Working in the
sheltered garden of who they thought was just a mean, strange old lady. A woman of very few
words, Miss Dirt Turtle lays a path of “foundation” – Starting with the earth around them. Can
there be hope in a world that greatly stacks the odds against these kids? Can five average 10-
year-olds, with the help of an Old Head, a social worker and some newly discovered comic book
super-heroes, find their way to a bright future? For sure, a seed can’t grow ‘til its planted in the
ground.

October 15, 16, 17 22, 23, 24
Terry Pratchett takes Shakespeare’s Macbeth and then turns it up ’till the knob comes off. It’s all there – a wicked duke and duchess, the ghost of the murdered king, dim soldiers, strolling players, a land in peril. And who stands between the Kingdom and destruction? Three witches. Granny Weatherwax (intolerant, self-opinionated, powerful), Nanny Ogg (down-to-earth, vulgar) and Magrat Garlick (naïve, fond of occult jewellery and bunnies).

A Christmas Carol is a play about a mean-spirited and selfish old man, Ebenezer Scrooge, who hates Christmas.  One cold Christmas Eve, Scrooge is unkind to the people who work for him, then refuses to give to charity, and then is rude to his nephew when he invites him to spend Christmas with him.  When Scrooge gets home, he is visited by the ghost of his old business partner Jacob Marley – and then by three ghosts! They are the Ghosts of Christmas Past, Christmas Present and Christmas Future.  The ghosts’ journey through time teaches Scrooge the error of his ways. When he wakes up on Christmas Day he is full of excitement, and buys the biggest turkey in the shop for the Cratchit family before spending the day with his nephew, full of the joys of Christmas.

The Garden of Rikki Tikki Tavi

When: February 13 & 14 @ 2pm.
Who: All actors 8 and up. (Previous Experience not required)
How: Everyone auditioning will be doing so via dry reading of sides that will be be provided. Being familiar with the story is encouraged, and the full script as well as several movie versions can all be found for free onlne.
Where: The audition and most rehearsals will be held at the First Christian Church located at 2121 Kanawha Terrace, St. Albans, WV 25177. Please park on the side of the building on Greenbrier Street.
The final production will play on April 16, 17, 18, 23, 24, 25, and will be a live streamed show.
The story follows the experiences of a mongoose named Rikki-Tikki-Tavi (from his chattering vocalizations) after he becomes the pet of an English family residing in India. He becomes friendly with some of the other creatures inhabiting the garden and is warned of the cobras Nag and Nagaina, who are angered by the human family’s presence in their territory.
Characters:
Rikki Tikki Tavi: Rikki is a small but
brave mongoose who defends his home and friends against their enemies.
Nag: Rikki’s enemy. Nag is the cobra Rikki must fight to keep the garden safe.
Teddy: The young boy in the story, who befriends the animals and feeds them treats.
Darzee: One of Rikki’s friends. Darzee is a tailorbird.

Chuchundra: Another one of Rikki’s friends. He is a muskrat that helps Rikki.

Register for auditions by clicking the button below.